Thanks for all the wonderful support bout my tail!

Mom is also cited because after blogging only 6 weeks, we have been nominated at Blogging Outloud for pet blog of the month! Thanks to whoever nominated us, and feels we are worthy.

Just to report, my tail am fine. I did "play it up for all it was worth," though, listening to many great suggestions from my cat blogger friends.

First of all, I runned around the house with my tail all bended. I held it up so the bend was very apparent. I made sure Dad saw me really good, then I laid down and gave it a good look-see while washing it. Then, I ran around again, being very pitiful. (we practiced this at the nap-a-thon so I really knew what to do.) After that, I went over to Dad's chair and "fell over", that gets them everytime. I pretended it hurted lots longer than it did, Mom tried to touch it and I yowled in protest. When she mention TED (The Evil Vet) I got better real quick. She checked it and said it felt fine, gave me extra stinky goodness and treats and lot of petting; I did good! I am ignoring her right now. I have my tail tucked, if you notice. 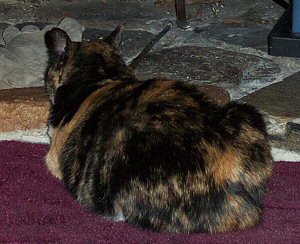 Posted by Big Piney Woods Cats at 7:00 AM

Congratulations on your nomination! ::cheering:: -- Muddy

Congrats on your nomination! I was told I was going to be nominated for an Oscar this year, but didn't hear my name mentioned during the announcements. HISS...

As for the tail and the subsequent drama...BRA-VO! You should write a how-to book on how to manipulate humans! Well played, Patches...well played!

The Meezers or Billy said...

Good job on the nomination AND on the hummum ma-nip-you-la-shun. i bet you had your mommy feeling really really guilty. as she should

Evil Vets have their place in the world! GK had an abcess and the quick thinking vet took care of it right away!

Take care of that tail and get lots of extra attention while you are about it.

Congrats on your nomination!

I wouldn't want to go to the V-E-T either, I try to bite my Vet and then she growls at me and she told momma that she has to growl at me too so that I know she's the boss but daddy just laughs at mommas growls, so she gave up.

Keeping your tail tucked sounds like a wise course of action! Especially with that clumsy woman in the house!

Congrats on the nomination girls!

PS You're doing a great job of ignoring in that photo. Sanjee is proud, no doubt.

Nice work, Patches. No real permanent damage. May I say, I hope you're both a little wiser. This could have turned out a lot worse in the end. Hee hee - my bad pun.

I iz glad yore tail is feelin' better - and I like thuh piksher of it tuckt under yoreself. Yu iz just as pritty back end as front end, cos this way we gets to see yore luvly colours frum a diffrent angle.

Glad to know your tail is fine, but poor, poor Baby Patches. Make sure all that good stuff we mentioned yesterday keeps coming.

... And, before we forget, congratulations on your nomination. We're sure you'll win.

So glad your tail am better. My bruvver had to go to the V-E-T yestirday for his check-up. He am fine but when he comed home he smelled funny. I went to sniff him and he growled and hissed at me! No fair! He am the one who smelled bad. And then he chased me all around and would not let me sleep on the bed with him and mama. He am so mean. I am so glad I have new poodin friends and that he didn't get to go to the napathon.

Congrats on your nomination Patches! I am glad your tail is feeling better. I do not let my humans close any doors in my house, except the bathroom one. I need my freedom to roam, not to mention safety for my lovely tail.

Good you milked it, Patches. And REAL good it's ok! I yowl any time anyone touches my tail at all. That's MY tail, I say, and no touchin it without permission. Maybe you should go around and tell that to all the doors. *nods*

Patches, good to know that your tail will be OK. Sitting on your tail is one way to keep it out of trouble. I don't mind mum touching my tail. Sometimes when she pets me she runs her finger from nose to the tip of my tail.

Don't be jeoulus of your mum wanting to nuzzle me. She did it just a little at the nap-a-thon. But you get to have her nuzzles all the time.

concats on your nomination!

and be shure to "milk" your bent tail for all you can. I yelp real loud when I get stepped on. Gets me cuddling or somethin every time.

You did a good job with your acting! heehee! Hope it's all better now. Good idea for keeping it tucked.

Patches, take care of your tail...we were so worried. Big purrs to you!


Mom posted my story...come read about me!

Tannie Man,
The Whippy Curly Tails in the Toasty South!
=^..^=

Big Piney Woods Cats
Once upon a time, in the far north reaches of Idaho, in a place called The Big Piney Woods, there lived four cats. Three lived inside the cabin; there to be loved, honored, and waited on. One chose to live outside, in the magical woods; there to be loved, honored, and eat mice. This is their blog, as told by them, in smart kitty fashion. You must overlook grammer and spelling; they are cats, after all. You will find their pictures and stories below, in the order they came here, to become part of our family.